I hated Mumbai. Let me be more precise: I hated Mumbai for shattering the neat little picture of the world I had built up inside my head.

Angus Deaton, the British economist who won this year’s Nobel Prize, wrote that “life is better now than at almost any time in history. More people are richer and fewer people live in dire poverty. Lives are longer and parents no longer routinely watch a quarter of their children die”. Our trip to China seemed to corroborate that: it was hard to find evidence of poverty at all (at least in big cities), an astonishing feat for a country that saw 35 million people die of starvation hardly 50 years ago. So we arrived to India with high hopes: the country has been growing steadily since the 90’s, driving the number of people living with less than a dollar a day from 42 to 21% of the population. That’s an incredible achievement by any standard, but what Mumbai first gives you is a glimpse of what those 21% (roughly 250 million) left behind live like.

We arrived to Mumbai around midnight. A crumbling Padmini taxi took us from the airport to downtown, a route that will go through some of the worst Mumbai has to offer. Thousands were sleeping alongside the roads, while cars zoomed by and missed their heads by mere inches. Some of them live permanently on the streets, while others came from nearby villages and were waiting for sunrise to sell their produce.

The first rays of sunlight replaced the masses of vagrants with unimaginable mayhem. Car horns are constant, and so is the heat. Streets are packed and littered with trash. Cows and goats roam freely. Mumbai is by far the most chaotic city we visited on this trip: coming straight from the idyllic car-free Gili Islands, it felt like being dragged to a Dutch rave party. Those carefully curated images of Mumbai you see on magazines? Places like the Gateway of India and Marine Drive do exist and are indeed beautiful, but are a tiny subset of Mumbai. Personally, there are three places I’ll remember vividly: the Dhobi Ghat, Haji Ali Dargah and the Mumbai Central Station. 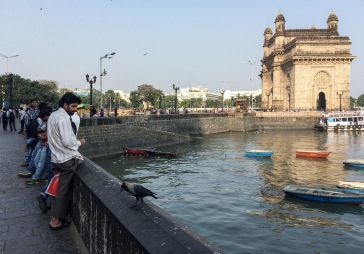 The Gateway of India is arguably Mumbai’s best known landmark

The Gateway of India was supposed to commemorate King George V and Queen Mary’s 1911 visit, but construction only started in 1915

Its design includes both Hindu and Muslim architectural styles

The Taj Hotel sits in front of the Gateway of India. The Hotel was one of the 12 targets of the 2008 Mumbai terrorist attacks

Security in the Taj Hotel is tight… 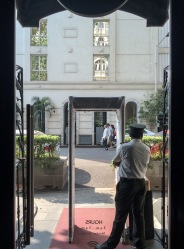 … and includes a Starbucks with a metal detector at the entrance! 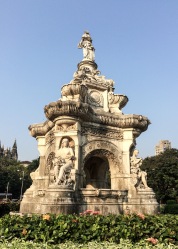 The Flora Fountain, in South Mumbai 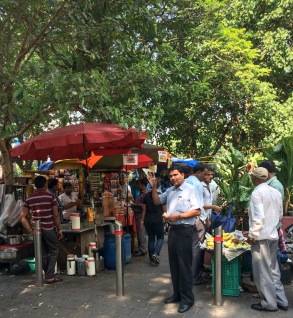 Street carts are a popular choice for lunch 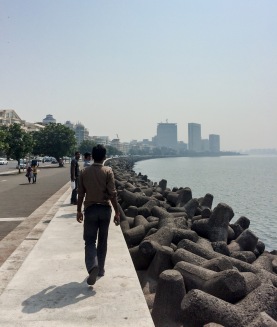 Mumbai used to be made up of 7 islands which were fully merged in 1845, after several land reclamation projects. This photo was taken at Worli, one of the former islands 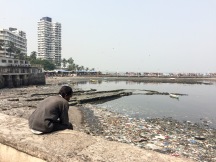 Stick to downtown and Mumbai looks no different from other big cities. But drift to the outskirts and it is something altogether different

The Dhobi Ghat is an open air laundry

Most of the laundry from Mumbai’s hotels, hospitals and barracks is washed here

Most clothing is hand washed by men, as the work is demanding and dangerous 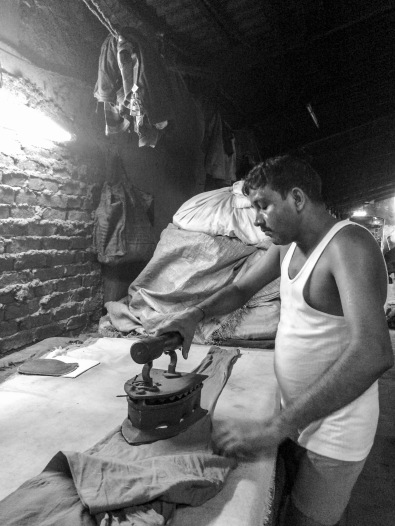 Clothes are pressed with charcoal irons, as electricity is expensive 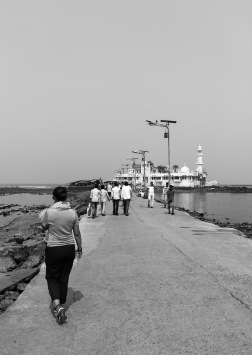 The causeway is nearly a kilometre long 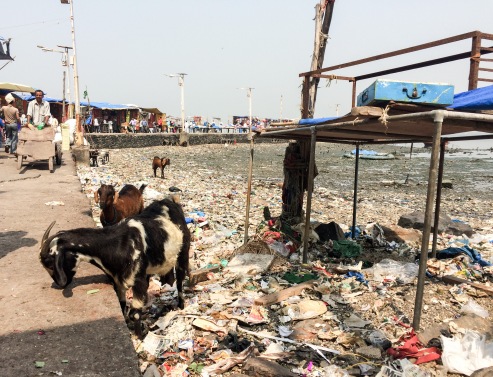 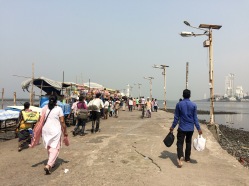 The causeway has rows upon rows of street vendors…

The Bandra Fort, which now overlooks the Worli Sea Link, was built by the Portuguese in 1640. Its original name was “Castelo da Aguada”, or “Castel of the Waterpoint”, a place where ships could get fresh water 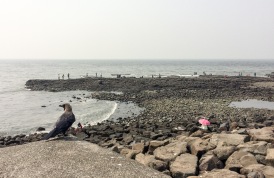 Before being handed to the British, Mumbai was controlled by the Portuguese. Some say its British name – Bombay – was a corruption of “Boa Bahia”, meaning “Good Bay” in Portuguese

The current edifice of the Mount Mary Church is only 100 years old, but it was built on the same location of an old Portuguese chapel from the 16th century 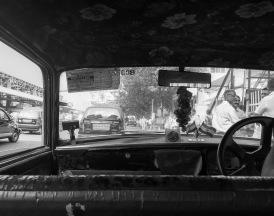 We tried a classic Padmini taxi… 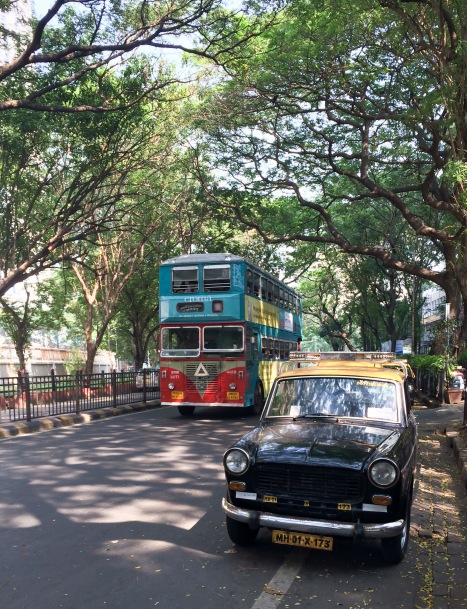 … but missed the double-decker bus!

Not a Padmini but pretty special too!

An assortment of other means of transportation are available

Our trip back to the airport, made during the day, was much more upbeat than our arrival trip, made at night

The Dhobi Ghat is an open-air laundry where the clothes from the city’s hotels, hospitals and barracks are washed. The washers, called Dhobis, are mostly male, as the manual labor is demanding and the washing chemicals aggressive. Many come from nearby villages to work and sleep in the Dhobi Ghat for a few years before returning to their families. Electricity is expensive, so clothes are pressed with old fashioned charcoal irons. Every penny counts, as the increasing use of washing machines inexorably reduces the demand for Dhobis.

Less than 3km west from Dhobi Ghat lies the Haji Ali Dargah, one of Mumbai’s best well known mosques (close to 20% of the city’s population is Muslim). Located in an islet in the Haji Ali Bay, the low tide engulfs the otherwise beautiful mosque in floating trash and a putrid atmosphere. The kilometre long causeway that leads to the mosque, made under the scorching midday sun, was as dire as our pictures suggest.

When walking back to our hotel, we stepped into the nearby Mumbai Central Station. Unlike the Chhatrapati Shivaji Terminus (where one of the 2008 Mumbai terrorist attacks took place), there’s nothing particularly memorable about this train station, apart from the fact that it was there that we got acquainted with India’s rather convoluted way of buying train tickets. After being able to buy train tickets in China without speaking a word of Mandarin, we were confident that buying tickets in India would be a piece of cake. We were wrong: it took us several hours, multiple forms and Jule’s negotiating savviness to get our hands on a couple of tickets from Jaipur to Agra (our next post).

Visiting these places generated a turmoil of thoughts and emotions. In retrospect, many were hopelessly patronising or downright wrong. First came the idea that there’s a secret recipe somewhere that would miraculously solve all of India’s problems. Something like “hey, let’s apply the Singapore model and in 50 years India will be one of the world’s most developed countries”. In his The Great Escape book, Angus Deaton compares these fatuous generalisations to Roman’s attempts to see the future in the entrails of chickens…

Next came up the notion that India is overpopulated and would benefit from some sort of population control mechanism. In fact, while China’s one child policy is the most well known mechanism of this sort, India has had population control programs since the 50s, most of them backed by international aid agencies. Besides the known cases of poor men and women forced or tricked into sterilisation camps, it is perhaps equally shocking to see foreign governments meddling in India’s population control. To make matters worse, there is little evidence that this sort of mechanism is effective. In the last 50 years, world population has more than doubled, but the doomsday predictions of widespread death and famine never came. Quite the opposite happened in fact: life expectancy increased and poverty decreased.

Lastly came the idea of throwing money at the problem. Tourists put on a little extra on everything they buy, developed countries set up international aid agencies to channel funds to developing countries. It seems sensible enough, yet there is a growing amount of evidence against it: China and India have grown considerably despite receiving very little aid on a per capita basis; conversely in Africa economic growth has actually decreased when foreign aid increased. Angus Deaton argues that, despite all good intentions, international aid hurts receiving countries by not allowing them to develop their own institutions and by helping to keep in place autocratic, corrupt or incompetent regimes. Deaton argues that the money would be better spent in researching third-world diseases like malaria and in bringing down obstacles to immigration and global trade.

We left Mumbai stunned and confused, but with the hope that we were a tiny bit closer to understanding a country like India. Complex problems rarely have simple answers, and realising this seemed already a major achievement for this couple of wannabe travellers. Our next stop will be at Jaipur and Agra. There will surely be no shortage of opportunities to continue to observe raw India, but with an intermission or two in places like the Taj Mahal!