After Shanghai and Beijing, our curiosity towards Chinese culture, so different from all we had experienced so far in this trip, was spiking. At the same time it was becoming painfully obvious how little we knew about the country that is home to one seventh of the world’s population. What better than a trip down memory lane, to some of the old capitals of the Chinese Empire?

Off we went on a train at 300 km/h (190 mph) towards Xi’an, our first stop in this historical tour. The first thing that comes to mind (and to Wikipedia) when thinking of Xi’an is the Terracotta Army, a mausoleum to the first Emperor of the Qin dynasty. It was created to be buried with the Emperor upon his death (210-209 BC) with the purpose of protecting him in the afterlife. It is an impressive collection, with an amazing attention to detail: all Army ranks are represented, with the statues varying in height and garments, the horses and carriages were created in full attire and the rivers were simulated using mercury. Must have been an unforgettable sight at the time! There are still ongoing excavation works in the site, and the tomb of the emperor remains untouched. Although several scholars have defended its excavation, the main argument against it is that the currently available technology is insufficient to guarantee its correct preservation. As an example, the Warriors unearthed so far lost all the coloring as no preservation techniques had been developed at the time. Another reason for leaving the tomb alone is that the mercury used for simulating those rivers is highly toxic. This was not known at the time, and some believe that the emperor died from taking mercury pills (ironically as an attempt to live forever).

So, all the elements for an Indiana Jones sequel are there. However, we felt a bit frustrated at the end of our visit. Not so much with the Terracotta artifacts, that are indeed amazing, but with the lack of information along the visit. It would have been great to have some timelines and information boards explaining what we were seeing and the meaning/purpose of it all. 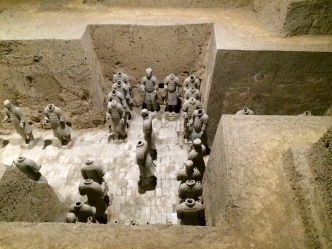 Discovered only in 1974, the Terracotta Army site is half exhibit, half excavation grounds. It will probably look very different 20 years from now! 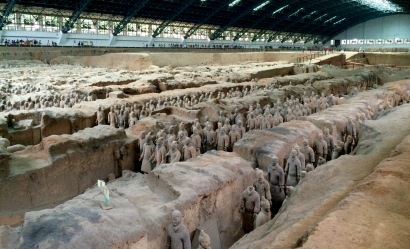 The Terracotta Army could be an Indiana Jones sequel: from the estimated 8,000 total warriors, only 2,000 were excavated so far

Many of the Warriors were beautifully painted, but the paint quickly flaked off when the statues were excavated 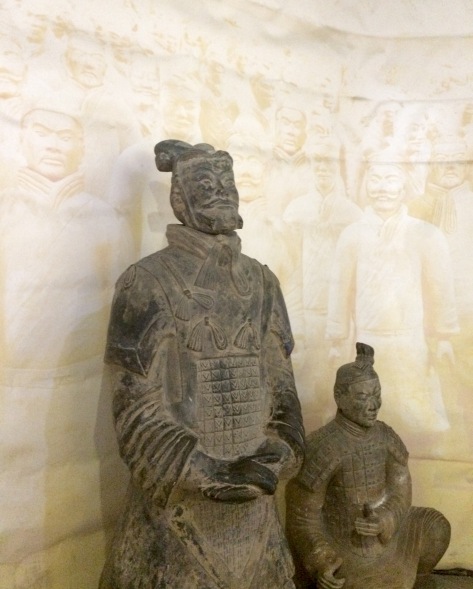 The closer you can get to a terracotta warrior is at the souvenir shop, but these are most likely copies, not the real thing 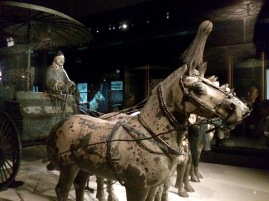 Many other artificats were buried in the mausoleum, including these fantastic bronze figures

Not all of them have aged gracefully over the last 2,300 years, though 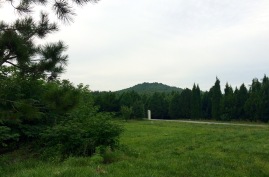 The emperor’s tomb (beneath the large mound seen in the picture), remains untouched, waiting for a time when technology is good enough to excavate it safely 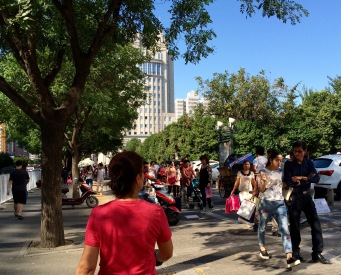 The Muslim quarter is always busy, but weekends are specially packed days! 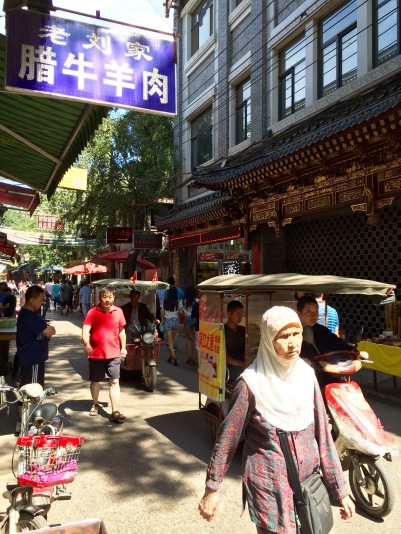 Till this day we still don’t know what kind of masquerade this was! A monkey with big antlers perhaps? 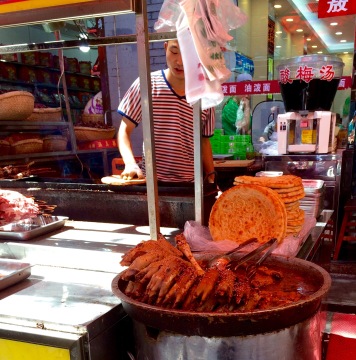 Xi’an has grown to a six million inhabitants city, but has succeeded in maintaining its historical heritage 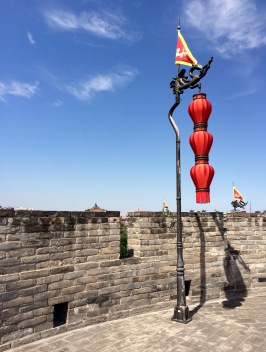 Xi’an is a city of contrasts, between its historical heritage and fast growing economy. Here we see an old temple within the city wall, with new apartment buildings as background 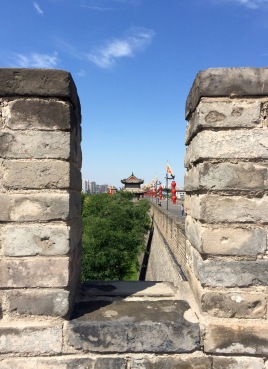 Peeking through one of the battlements in Xi’an city wall

We were perfectly coordinated in this first tandem bicycle ride. Just look at our smiles! 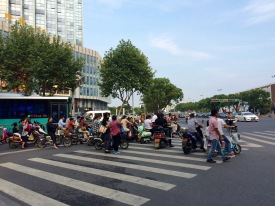 When crossing a road in China you need first to pay attention to the cars still coming, then to all the motorcycles and bicycles that will deliberately be in your way and finally try to make the full length of the road in the few remaining seconds that you still have left before the sign turns again!

Armed with a notepad with our first jotted Chinese characters, we spent half an hour gesturing with a patient teller before managing to buy the correct tickets 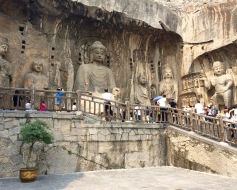 The Vairocana Buddha is the main attraction at the Longmen Grottoes… 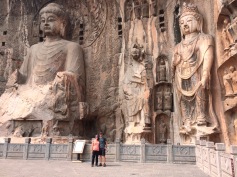 … But we somehow managed to get it for ourselves for a brief moment! 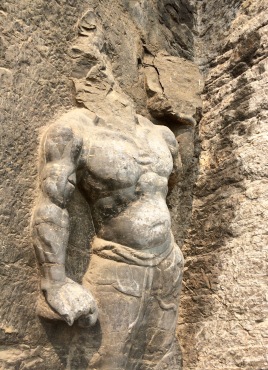 Many of the statues were desecratd over the years 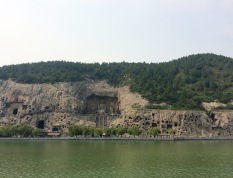 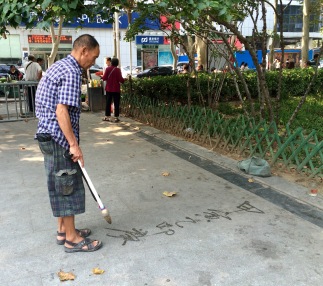 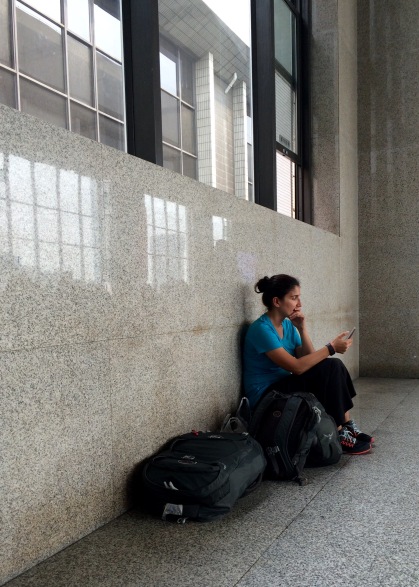 Jules waiting for one of our trains

This sign was in an elevator: the drawing is suggestive enough, but use Google Translate if you’re unsure what it means 🙂

A street vendor rests on the margins of the canal, at Suzhou

A view of the houses facing one of the canals in Suzhou. Much appropriately it is called the Venice of China 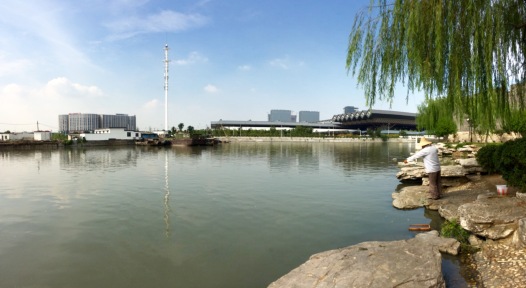 A bucolic setting, with a fisherman on the river margins in Suzhou 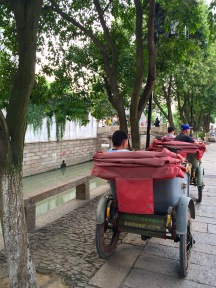 Rickshaws are still part of the landscape in Suzhou

Old alleys are similar in every country. This one is in Suzhou but could as easily be in Lisbon

Just like in Venice, here also you can go down the canal in one of these nice boats 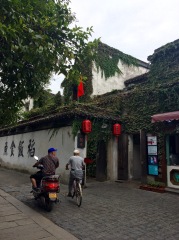 All along the Suzhou canals you’ll find houses like this, evoking ancient times

Another view of the beautiful canals in Suzhou 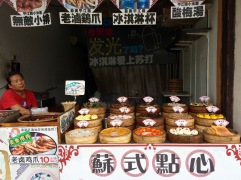 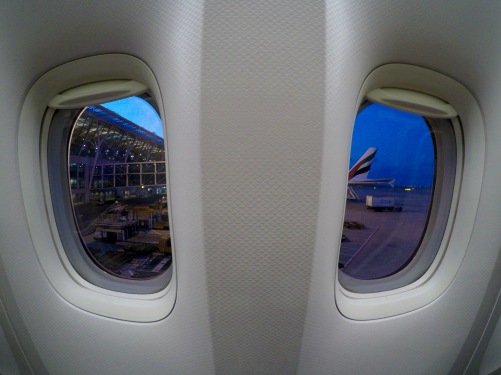 Fortunately Xi’an, with nearly six million inhabitants, has a lot more to offer than ‘just’ the Terracota Warriors! A great example is the Muslim quarter (roughly 2% of the Chinese population is Muslim). I don’t remember seeing such a profusion of colors and flavors elsewhere. It was like being all over the world, in only one street. From exotic foods to haircuts, you can find anything here, including black eggs. Commonly known as ‘century eggs’, these are not for the weak of stomach: after maturing from several weeks to several months, they acquire a pretty intense flavor! Another must do if you are in town is a visit to the city wall. It is one of the oldest (dates back to 194 BC) and best preserved city walls in China. It was built during the Ming dynasty and has a total length of 13 km. Following some tips we decided to cycle it, so we could have a view of the whole city wall. As soon as we got there our eyes bumped into a tandem bicycle, something that we had never tried before… And it was super cool, with a bonus of great views of the city from all the corners of the city wall.

Xi’an offered a spectacular window to Chinese history and left us hungry for more, so we hurried to the train station to set our next destination. Most foreigners resort to an agent to buy the tickets, but it’s an unforgettable experience to do it by yourself: armed with a notepad with our first jotted Chinese characters, we spent half an hour gesturing with a patient teller before managing to buy the correct tickets. The train we chose was painfully slow though, and it took us 7 hours to get to Luoyang. Nevertheless, a trip in a regional Chinese train is probably something that anyone looking to understand more of the Chinese culture outside the big cities should do. The seats were hard, the space minimal and the air conditioned just a faint reminder of its existence. But everyone was extremely nice and accommodating. There’s always space for one more and a smile to spare.

Luoyang was one of the Four Great Ancient Capitals of China (together with Xi’an, Beijing and Nanjing). In 25 AD it was declared capital and its influence as focal point in China lasted for several centuries. Nowadays it has lost some of the old times grandeur and it is a very cosmopolitan city, home to some six million inhabitants. The main reservoir of history here are the Longmen Grottoes, an impressive collection of more than 100,000 Buddhas carved in limestone along the margins of river Yi. Its construction lasted from 493 AD until 1127 AD, and in 2000 it was declared an UNESCO World Heritage Site. The site has been vandalized several times, either during wars (e.g. the Second Sino-Japanese war) or periods of political unrest (1940s) with many statues gone or missing parts. Nevertheless it is still an amazing collection, featuring an impressive 17 meter tall image of the Vairocana Buddha.

After Luoyang we went east, to Suzhou, a beautiful city sometimes called the ‘Venice of the East’. Full of interlacing canals, beautiful arched bridges and meticulous gardens, it left us with a feeling of time traveling. One of the highlights of this trip, no doubt!

Alas, it was unfortunately time to say goodbye to China. After a mere couple of weeks in a country this big, much was left undiscovered. While boarding our plane to Bangkok, we vowed to come back and continue to discover this amazing country and its people (assuming we can get our visas renewed after this). And the best part is that China is like a freight train doing 200 miles per hour: much will surely change before our next visit!