Our initial plan was to go straight from Cambodia to Singapore, but flights through Malaysia were cheaper so we figured we could save a bit and get to know an extra country. Plus, this would also give us the chance to visit Malacca, a Malaysian state that was conquered by the Portuguese in the 16th century, in a (failed) attempt to control Asian trade routes.

So in a muggy and hazy evening, we found ourselves in Kuala Lumpur. Besides that bit of colonialist trivia about Malacca, we knew virtually nothing about Malaysia, so we got to work. Malaysia is officially a Muslim country (the first we visited on this trip), but its constitution warrants freedom of religion for the 40% of the population that isn’t Muslim (mostly Buddhists). That may look good on paper, but in practice it’s not that simple. For instance, there’s two parallel justice systems (a secular one and a Sharia one) with somewhat vague and overlapping jurisdictions.

Malaysia is also the only federation in Southeast Asia, made up of thirteen states (the fourteen stripes in its flag represent these thirteen states plus the federal government). The federation itself is a young one (it achieved independence from British rule in 1957), but the Malay kingdoms that constitute it go back to the 13th century, when Islam spread to the area. The Orang Asal, an indigenous people that today make up for 10% of Malaysia’s population, lived in the area way before that, probably since 2.500 BC. These days, Malaysia is one of the most vibrant economies in Southeast Asia, having grown at an average 6.5% between 1957 and 2005. 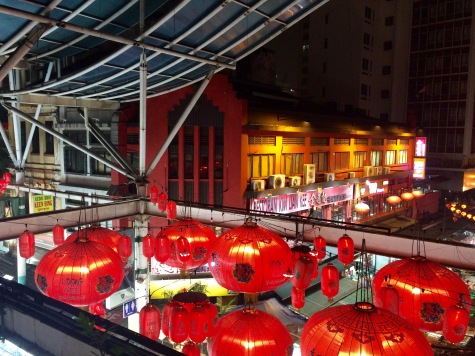 Over 40% of Kuala Lumpur’s population is of Chinese ancestry

This street took us straight back to Beijing’s hutongs!

These illegal slash-and-burn fires are a major health hazard

These paragliders don’t seem to mind though

The Petronas Towers was the tallest building till 2004, when Taipei 101 was built

The KLCC Park is a nice place to hang out… 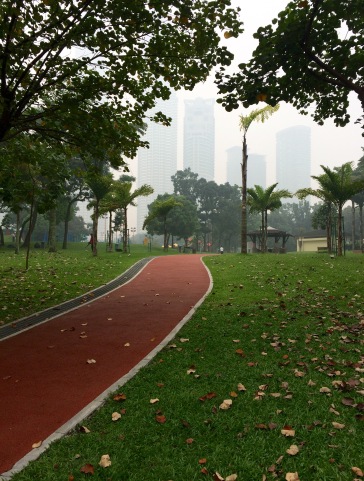 A representation of Hindu deities in a Kuala Lumpur temple

Mallaca’s downtown is crossed by a river 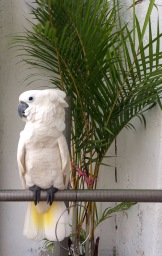 … some of them with rather original hosts

This is the sea that Afonso de Albuquerque saw when he arrived from Goa in 1511, ready to conquer Malacca

These days he would appreciate the seaside Lisbon Hotel 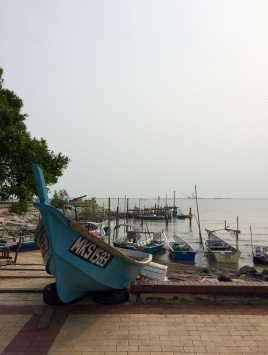 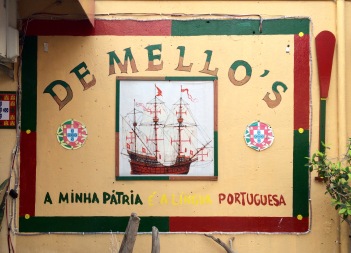 We met Mr. Mello, a genuine Portuguese from Malacca!

The Famosa fortress, built by the Portuguese after arriving to Malacca, was mostly destroyed by the British in the 19th century. Sir Stamford Raffles (the founder of Singapore) happened to be visiting Malacca at the time and managed to save this gate house 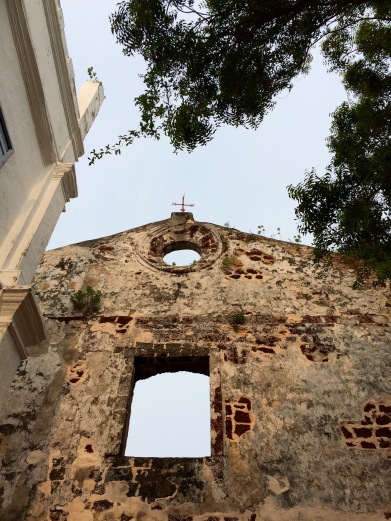 Close to the remains of the fortress you’ll find St. Paul’s Church…

Not everything in Jonker Street is Chinese: here’s some Pastéis de Nata!

Southeast Asians are crazy for durian, a fruit so foul-smelling that it’s prohibited in most public places 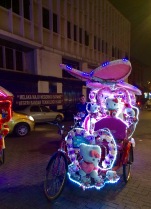 Japan has nothing on Malacca’s rickshaws!

A statue of Gan Boon Leong, a Malacca local that was Mr. Asia in the 1950’s

Sometimes it takes us ages to walk down a single street, because Verne insists on taking pictures of everything!

Enough about that, is Kuala Lumpur worth a visit? Well, I wouldn’t plan a whole trip around it, but there’s definitely cool things to see. The Chinatown, for instance, is the real thing and reminded us of walking around the Muslim Market in Xi’An. There are also many Muslim, Christian, Buddhist and Hindu temples spread throughout the city, illustrating Malaysia’s religious diversity. Then there’s the Petronas Towers, a classic. We didn’t actually go up to the observation deck, because the price is pretty steep (close to 20€) and the sky was so hazy we wouldn’t have seen a thing. The haziness you seen in all the pictures is actually man-made: every dry season, the smoke from slash-and-burn fires in Indonesia (an illegal technique used to convert forests into agricultural fields) spreads out though Southeast Asia, causing haze and respiratory illnesses.

What about Malacca? Malacca is a tiny state 150km (90 miles) south of Kuala Lumpur, and getting to its capital (aptly named Malacca City) by bus is a breeze. Because of its strategic location for sea trade, Malacca was coveted by many throughout history. In the 15th century, is was a tributary to China, which used it as a stopping point for Zheng He’s fleet. In 1511 it was conquered by the Portuguese, in hopes that it would help them control Asian trade. They failed miserably, only managing to disrupt trade and pissing off everyone involved. in the 17th century the Dutch clawed back Malacca from the Portuguese, but didn’t really do anything with it till the 19th century, when it was ceded to the British.

These days you’ll find plenty of references from these cultures throughout Malacca. A quarter of its population is of Chinese ancestry, so there’s whole areas of the city where you’ll only hear Chinese (Jonker Street is a blast to visit in the evening: highlights include Chinese karaoke and foul-smelling durian). There’s a Portuguese Settlement (created in the 1930’s as a haven for the Kristang, an ethnic group with mixed Portuguese and Malay blood) that attracts huge crowds looking for Portuguese-style seafood and fish. And there’s the Dutch Square, a profusion of red terracotta buildings built for the Dutch Governor.

Next stop is Singapore, which briefly made part of the Federation of Malaysia before being kicked out. They did pretty good by themselves, but I’ll let Jules tell you about that!

8 thoughts on “Day 120: An unscheduled stop in Malaysia”