“You know, our blog’s name might be an issue if we decide to have a kid”, said Jules. “Oh, don’t worry, we can always change it to Jules Verne Times Three”, I retorted. “Plus, no sane kid would ever want to have a blog together with his parents. It would be like having a family Facebook account”. As it is often the case, I had misjudged the matter entirely. Changing the blog’s name is a confusing affair, and babies don’t say much.

We decided to interpret his silence as an indication that he doesn’t mind being part of the blog (to be reassessed after he turns into an obnoxious teenager). Luck would have it that Jules Verne – the writer, not the bloggers – had a middle name: Gabriel. That settled the matter: Jules (the mother), Gabriel (the son) and Verne (the father) will continue to travel the world and write about it. 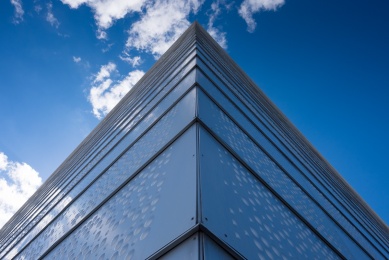 Gabriel’s maiden voyage was a one-week trip to Norway. Over this trilogy we’ll talk about the good, the bad, and the snotty of travelling with a six-month old blogger.

First challenge: packing. It quickly became apparent that our trusty backpacks wouldn’t cut it, so out came the trolleys up to this point reserved for business trips. Despite weighting ten times less than I do, Gabriel hoarded a trolley for his exclusive use, leaving Jules and I to share the remaining one. 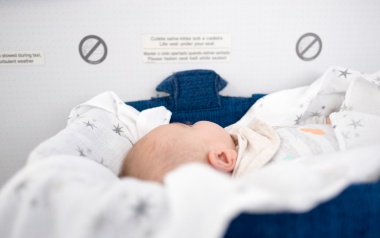 We flew from Lisbon to Olso, a four-hour affair that went surprisingly well. After our fair share of flights next to babies capable of crying non-stop through multiple time zones, we were worried. But Gabriel, apart from a few excited squeals, didn’t utter a sound during the entire flight. One hand stuffed with food, the other one grasping his favourite toy, plus two inquisitive big eyes looking at everything. The candy that we had brought to bribe fellow passengers never left the bag.

I had been to Oslo twice before, but never for leisure. As we slowly walked through Oslo’s streets, both due to the weight of the trolleys and our lack of hurry, we appreciated how serene the city is. The whole town seemed to be out, quietly enjoying the sunny Saturday morning. The setting immediately reminded us of Copenhagen. 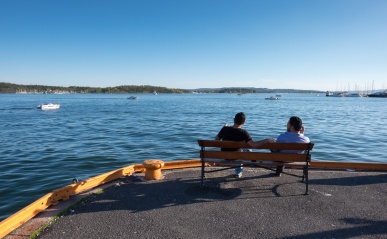 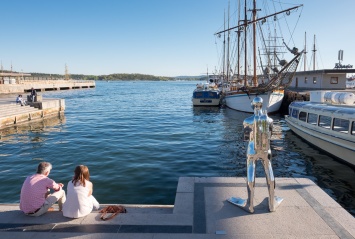 Gabriel enjoyed our walks too, provided they didn’t interfere with his routines. Accustomed to wandering the whole day with no strict schedule, this took us some getting used to. After a couple of botched experiments, Jules and I figured out the furthest we could get away from our rented apartment before having to hurry back for the next snack or nap. It wasn’t a terribly large radius, but fortunately the apartment was centrally located. 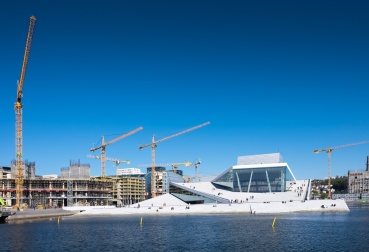 One of the landmarks within that safe zone was Oslo’s Opera House. Quietly sitting at the shoreline, dressed in white granite and Carrara marble, it looks like the virtuous sister of the Black Diamond, Copenhagen’s somewhat menacing looking Royal Library.

Norway and Denmark’s kinship goes well beyond an affection for striking architecture. Up till 1814, both countries were part of a personal union that shared a monarch and centralised many governing functions in Copenhagen.  Oslo – mostly built from wood at the time – was destroyed by fire in multiple instances, which further explains why most of the city’s landmarks are very recent. The University is from 1813, the Vigeland Park from 1927, and the City Hall from 1950.

Nevertheless, amidst the flurry of contemporary landmarks and tall yellow cranes labouring over new buildings, there are still glimpses of the old days. One of the oldest surviving buildings – just within reach of Gabriel’s operating radius –  is the Akershus Fortress, a 13th century medieval castle that protected the city during countless sieges. Strategically located on a hill overlooking the port, it was often targeted by foreign forces – particularly the Swedes – in an attempt to control the region’s maritime trade. 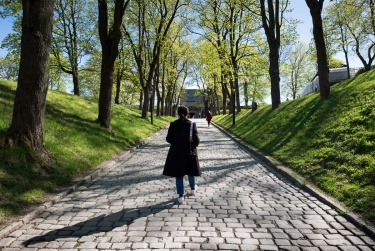 Gabriel seemed to enjoy his first incursion into foreign lands, provided his hierarchy of needs was strictly met: first comes food, then comes sleep, and only then comes travel. If he follows the footsteps of his parents, things won’t change much with age.

On the second part of this trilogy we’ll talk about our road trip from Oslo to Trondheim. The landscapes were breath-taking, but were sometimes accompanied by Gabriel’s equally breath-taking soundtrack.