Peru was one of our most anticipated destinations. Verne had already been to Machu Picchu, so we decided that we should take some time and get to know the rest of country a bit better. Lima, Arequipa, Puno, Cusco and Machu Picchu were our picks, and we’ll be telling you all about these in the coming posts. But let’s talk about Lima first!

We had googled a couple of things about Lima, and truth to be told, we weren’t super excited with what we read. When in a new city we like to wander around, and “get lost” in the streets. This is not an easy thing to do in Lima. Much like São Paulo, there are super nice and safe places, but you also easily end up in less inviting areas.

Jules contemplates the Pacific Ocean on our first morning in Lima 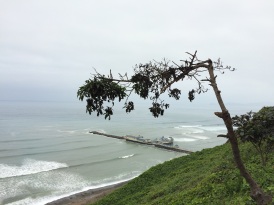 Miraflores is super nice, but it does feel a bit artificial and detached from the rest of Lima

Lima’s beaches used to be poluted, but recent improvement in wastewater treatment seem to be addressing that

Verne tries to pet every single animal he sees, but this seagull wasn’t into it 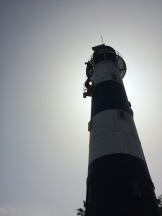 Workers on ‘La Marina’ lighthouse, relocated from Punta Coles in 1973 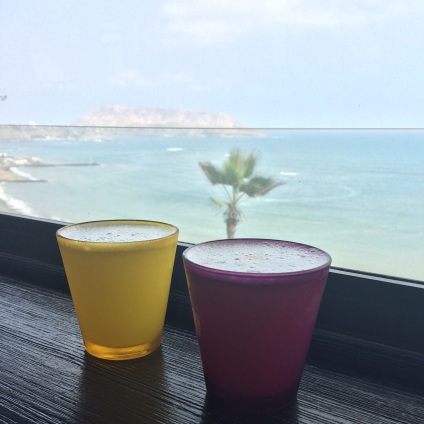 There’s a rivalry between Chile and Peru regarding the “true ownership” of the pisco sour: having tried both we can safely say that there’s a well deserved tie! 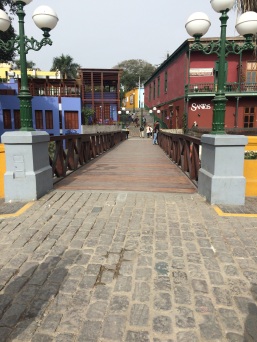 The ‘Puente de los Suspiros’, in Barranco. As the legend goes, if you make a wish and hold your breath the first time you cross the bridge, your wish will come true

The San Francisco church in Barranco 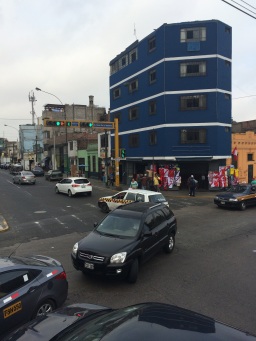 Traffic in Lima is chaotic…

… despite the efforts of these brave policemen 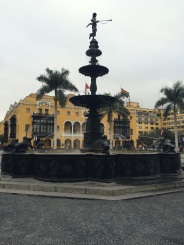 Bronze fountain in the middle of Plaza Mayor (also known as Plaza de Armas). A curiosity is the fact that on the Peruvian National Day (July 28th) pours pisco, instead of water!

Lima, like all cities with Spanish architecture influence, is full of nice plazas. This one is in front of the ‘Convento de San Francisco de Assis’, where we can find the entry for the catacombs (unfortunately no pictures allowed there) and one of the oldest libraries in South America

Jules chatting with Andy, a Brazilian friend that we got to know in Lima, having as background the ‘Convento de San Francisco de Assis’ facade 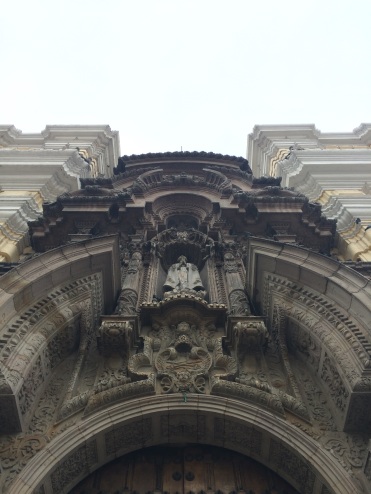 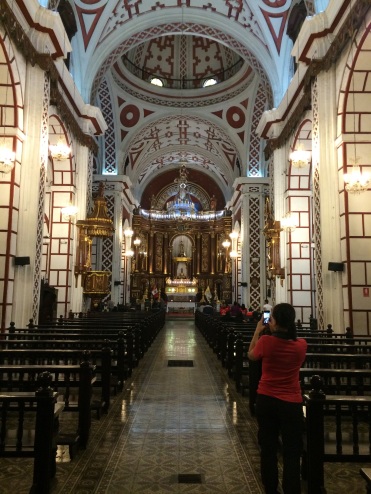 The ‘Convento de San Francisco de Assis’ has survived several major earthquakes, including the largest in 1746. It’s interiors evidence influences of baroque and Arab brought by the Spanish.

Bye, bye Lima! We’re heading to Arequipa in a 17h bus drive (we’re taking the bus instead of a plane to save some soles: everything in Peru is quite expensive for foreigners)

In terms of architecture, Lima is very diverse, with buildings spanning from different eras and influences, coming from pre-colonial times to more recent Art Deco influences. However the frequent earthquakes have greatly contributed for the disappearance of older buildings, and with the exception of the downtown district, most of Lima’s architecture is very recent. From the forty three districts in Lima, Miraflores and Barranco are probably  the nicest, with their commercial and bohemian vibes. However, there’s almost an artificial feel to them. Every step you take there’s a “serenazgo” (unarmed police) and cameras everywhere. It’s probably safer than a Swiss bank!

Still, these are pretty good places to just hang around, go down to the beach and check on the surfers, or take a paragliding tour over the city.

I guess we only felt in touch with a more “real” Lima in downtown, when visiting Plaza Mayor and all those majestic colonial buildings, built in the usual Spanish way: Religion, Justice and Government all facing the main square. Lima’s Plaza Mayor has a unique and delicious feature: on July 28th the date of the independence from Spain, the fountain in the middle stops pouring water and starts pouring pisco! If you’re planning a trip to Lima, try to make it on that date 😉

One thing you need to get used to in Lima (and in the rest of Peru) is that Peruvians love their car honks. They’ll honk for pretty much anything: to signal a stop, turning right, left, say hello, say goodbye, ask if you want a ride, and basically whatever else is on their minds.

Talking about cars, we’re now taking off to Arequipa, in a 17h bus drive… It’ll be a honking nightmare 🙂