When we woke up in our first morning in Quito there was this amazing light in the sky that immediately reminded us of Lisbon. We might have been a bit homesick that day 🙂 We could not stop snapping pictures! The vivid contrast between the blue sky, punctuated with some very white clouds and the colors of the city was captivating.

Quito is a very welcoming city and it was easy for us to feel at home. It felt pretty safe, but as usual in big cities, always keep an eye open for pickpockets. From the top of it’s 2.850m, it’s the highest capital in the world, which also allows for great views, as we could testify from the top of ‘El Panecillo’.

‘Calle Garcia Moreno’ or ‘Calle de las siete cruces’, the main street in the historical centre got its name from the seven crosses along the way, built to reinforce the catholic faith in the 16th and 17th century population, that still followed many pagan rituals

The light in Quito reminded us of sweet home Lisbon! 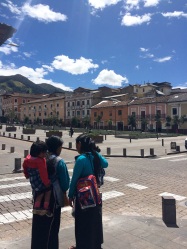 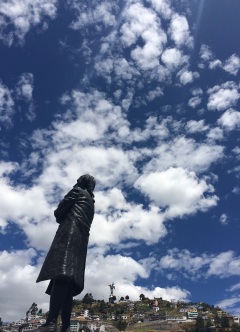 Statue of Eugenio Espejo, an equatorian scientist, writer, lawyer and one of the main precursors of the separatist movement in Quito

It’s not Valparaiso, but there’s some cool street art in Quito too

Hop-on hop-off buses are still one of our favorite ways to scope out a new city (except when they’re a ripoff, like in Buenos Aires)

Enjoying the view from the top of’Cerro El Panecillo’

Ah, the hardships of travelling!

Verne catches a glimpse of his true self! 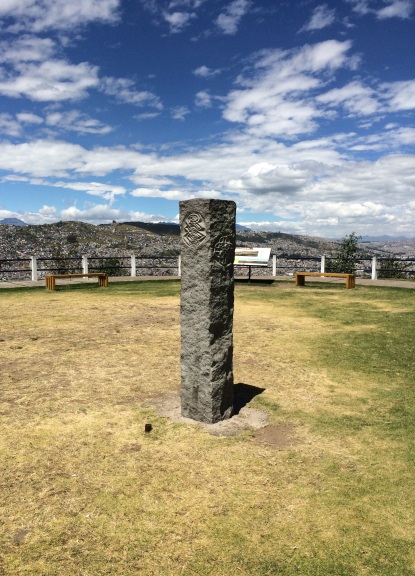 Stone monolith that, according to a more spiritual interpretation, is an energy source, connected directly with the centre of the planet (that, or just another nice stone work 🙂

The ‘Virgen de Quito’ statue generated a lot of controversy, as it was erected on sacred pagan grounds (plus, it’s arguably ugly as sin)

Inebriated by his recent blogging celebrity status, Verne does the duck face

Besides the light, Quito has another thing in common with Lisbon: the hills!

Descending from the ‘Cerro El Panecillo’. We were later warned that this is a shady neighborhood, but we had no issues whatsoever… 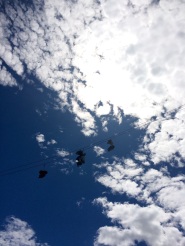 Facade of ‘La Basilica del Voto National’, a neogothic 19th century church, that still remains “unfinished”. The local legend says that the end of the world will come upon its completion (nice excuse 🙂

A glimpse out of the ‘Basilica del Voto Nacional’ 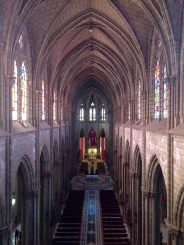 The inside of ‘Basilica del Voto Nacional’ 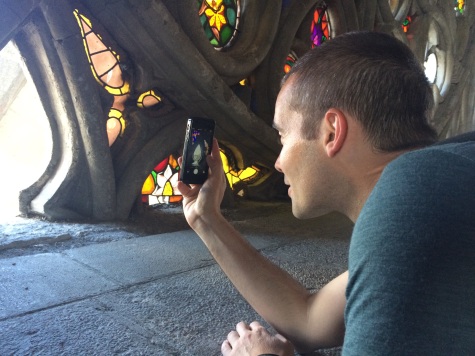 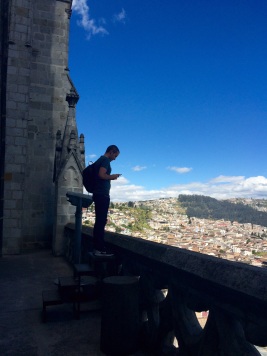 In any other city this platform would be a lawsuit waiting to happen, but ‘Quiteños’ are pretty laid back

View of the interior of the ‘Basilica del Voto National’ dome, with one of the many ‘rosaceas’ at the end

Verne going all the way up to the highest roof of the ‘Basilica del Voto Nacional’. Jules chickened out and stayed down below taking pictures

The ‘Parque La Carolina’ has a great running track

Running at this altitude is tough, these guys are rock stars! 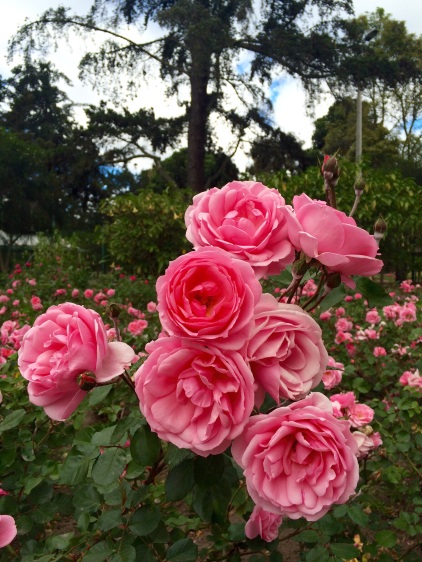 The ‘Jardin Botanico de Quito’ has a beautiful rose garden…

… and a stunning collection of cactus and…

Overview of the orchid’s beautiful greenhouse, inspired by the European greenhouses from early 20th century 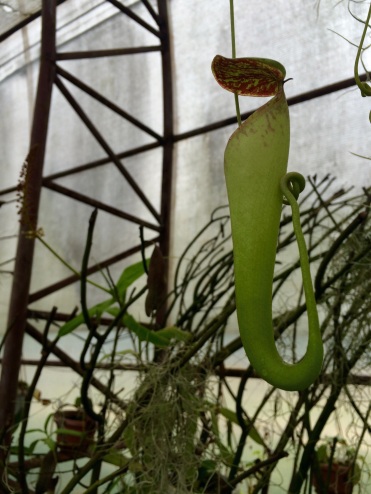 Close up on one of the fascinating carnivorous plants… Although they prefer insects, one should keep an eye open 🙂

Quito’s history goes back in time, to 870 AD, when the Caras tribe conquered the Quitu tribe located there, and created the Kingdom of Quito. During the 15th century, the Caras were defeated by the Inca’s and became a part of their vast empire, until 1543, when they were in turn conquered by the Spanish. This lasted until May 24th 1810, when Mariscal Antonio Jose de Sucre, under the command of Simon de Bolivar, led Quito to independence. This was a mark in Ecuador’s history and you’ll find frequent references to Mariscal de Sucre all over the city.

Quito is a UNESCO world cultural heritage site and has the largest and best preserved historical centre of all South America. And indeed you will find here all the traces of colonial architecture, with the nice terraces, the small houses with flowered balconies, the plazas (Quito has three main plazas: ‘Plaza Grande’ or ‘Plaza de la Independencia’, ‘Plaza de Santo Domingo’ and ‘Plaza San Francisco’) and numerous churches. Religion does play a very important role: when we arrived the city was getting prepared for the Pope’s visit in five days time. Everyone would tell you about it and it was palpable the importance and significance of this visit.

This mixture of Spanish and Incan/pre-Incan legacy gives the city an exotic flavor, but this coexistence is not always peaceful, as demonstrated by the controversy around the 45 meter tall aluminum statue of the “Woman of the Apocalypse” (or according to the locals, a representation of the ‘Virgen de Quito’). This impressive (but not necessarily elegant…) statue was built on top of ‘El Panecillo’, a 200 meter hill on the South of Quito, a place were ancient pagan rituals used to take place. Religion controversies apart, what is truly amazing in ‘El Panecillo’ is the view over the city! It totally deserves a visit by car or, better yet, by climbing up the steep staircase.

After strolling for some time through the streets and monuments of downtown Quito, we were longing for some contact with nature, and headed to ‘Jardin Botanico de Quito’, a very calm and relaxing spot, in the middle of ‘Parque la Carolina’. There you can find a beautiful rose garden and an impressive cactus and succulents’ collection, but what impressed us most was the incredible orchids greenhouses, in such a variety of forms and colors. Oh… and the carnivorous plants as well! Verne totally felt at disadvantage there 🙂

This was a great leeway for our next stop: the most anticipated visit to the Galápagos Islands! I’ve been dreaming about this since the first time I studied Darwin’s Theory…
Jules *

8 thoughts on “Day 26: Quito, the highest capital in the world!”