There’s so much to say about Galapagos that we decided to split it into two posts: in this post Verne talks about its people and places, and here Jules continues with its wildlife.

If you’re stuck in an office you should probably stop reading now: Galapagos has to be one of the most incredible places in the world, so better not look at the pictures below before doing that report of yours.

Alas, Galapagos is not cheap: most visitors pay between 2.000 and 10.000 US$ for a cruise around its islands. That was an order of magnitude over our budget, so we looked for more reasonable options. Fortunately the internet never disappoints, and we a found a couple of brilliant backpackers that managed to do Galapagos on a budget.

The first step was a hard one: splurge a bunch of our hard-earned frequent flier miles on a flight from Quito to San Cristobal. San Cristobal is one of the archipelago’s four inhabited islands, and acts as its administrative capital. Don’t expect Canberra though: the airport strip was barely long enough for our A319, and we actually walked from the airport to the centre of town (how cool is that?).

After touring South America’s mega-cities, arriving to San Cristobal was like entering a buddhist temple: there is only a handful of tourists (the others are gulping down margaritas in the cruise ships), cars are sparse and locks are nonexistent, as crime is virtually unheard of.

As for the locals, they combine the typical South American flair and hospitality with a less typical desire to provide an honest service for an honest price: not once we felt that we were being ‘gringo taxed’. The other locals are nice too: after decades of peaceful coexistence, the Galapagos wildlife does not fear man and will happily pose for photos. The sea lions are particularly cheeky, but I’ll let Verne talk about that! 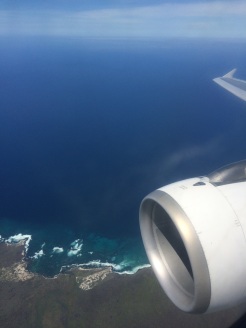 Our first glimpse of Galapagos 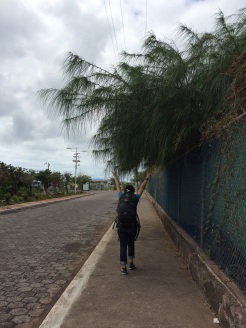 Walking from the airport, no taxi or bus this time! 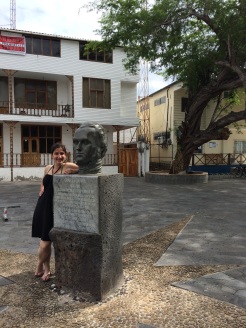 Jules poses next to a young Darwin 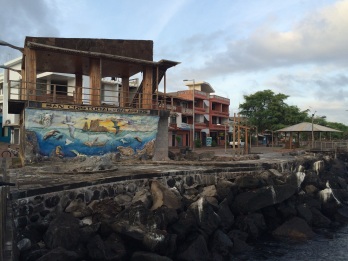 View of the pier and waterfront in San Cristobal

Sleepy sea lions in the morning sun (to be honest, they look sleepy the whole day!) 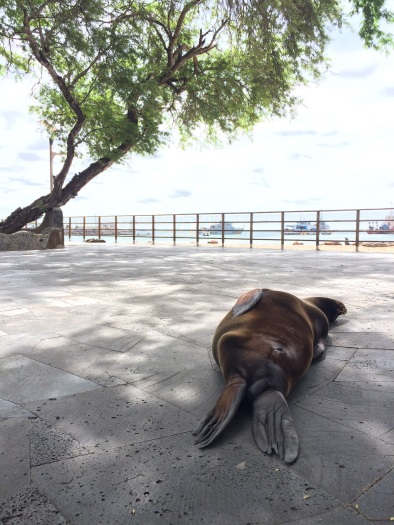 We were a bit skeptical when we read that we would have a chance to see wildlife up close and personal, but it’s absolutely true! 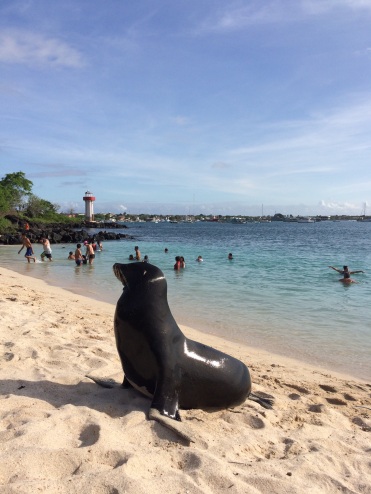 Beaches are shared among humans and sea lions. The latter will sometimes want your spot: nothing to do but move over!

Everything is remarkably well maintained. This path leads to the viewpoint in ‘Las Tijeretas’, in San Cristobal 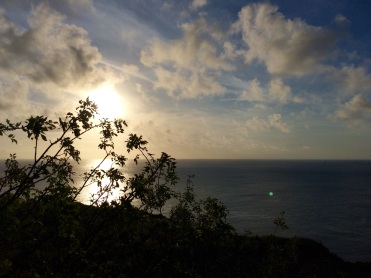 Everything is walking distance in the Galápagos, and most of the time you’ll find yourself walking alone

Heading over to a great afternoon in ‘Playa La Loberia’, in San Cristobal

‘Playa La Loberia’ in San Cristobal. You can spot a magnificent frigatebird in the sky

As the legend goes, the ‘Volcan El Junco’ is shy and will cloud up when there are visitors around 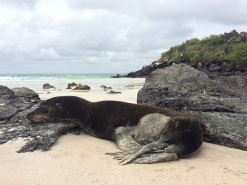 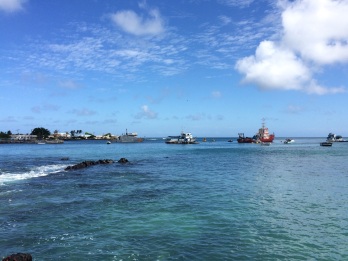 The shades of blue that you can get here would make any Pantone color chart jealous! 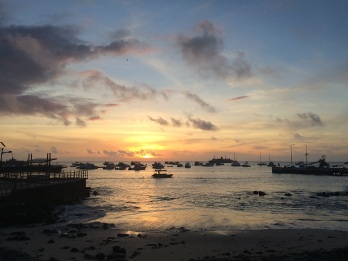 Still happy, before having to resort to all our Jedi powers not to use the little black bags 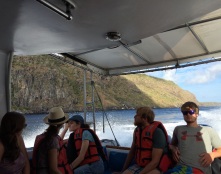 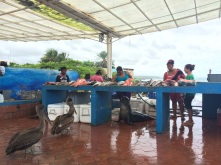 Some non-paying customers at the fish market in Puerto Ayora

A closeup of the Ceramic Garden, in Santa Cruz

The path to ‘Tortuga Bay’ made out of local volcanic rock, takes you right through dense vegetation 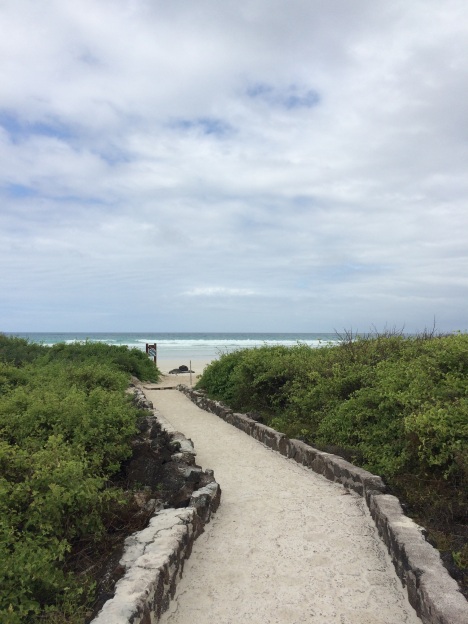 After a 3km walk, we finally reach ‘Tortuga Bay’

‘Tortuga Bay’, in Santa Cruz, is one of the most incredible beaches we’ve ever seen

The opuntia cactus are endemic to Galapagos, and look like a mashup between a tree and a cactus

Jules trying not to scare this beautiful blue footed booby 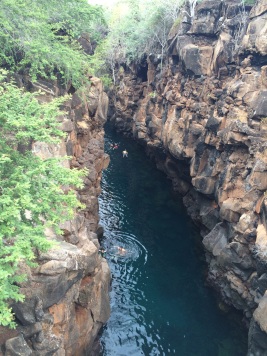 ‘Las Grietas’ in Santa Cruz: it’s supposedly a great place for snorkeling, but we didn’t see much

An overcast and windy (but hot) afternoon in Isabela 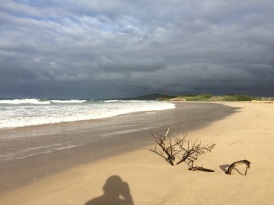 How often do you get a beach all for yourself? This one is a mere 500 meters from the centre of Puerto Villlamil, in Isabela

A family of marine iguanas in Isabela’s pier

Jules, you paddle and I’ll take the pictures!

Probably only our Spanish and Portuguese readers will relate to this one: remember ‘Verano Azul’?

A birdseye view of Isabela island 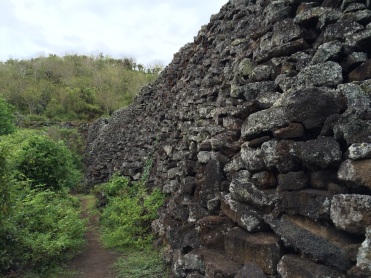 ‘Muro de las Lágrimas’: Isabela was a penal colony, from 1944 until 1959, when was closed due to severe abuses upon the prisoners. Hundreds died in the construction of this wall and other forced labour activities. The wall remains as a tribute to those days.

If you’re a history buff, Galapagos will be a bit of a let-down: these islands were only discovered by chance, by the Spaniards in 1535, so no big old Incan ruins here. The oldest thing you will probably see will be a Galapagos turtle, from which the archipelago got its name.

However, what Galapagos lacks in history it more than gives back in nature: exit San Cristobal’s town in any direction and you’ll find incredible places. The first one we saw was ‘Playa Mann’, an incredible beach that we shared with only a few humans and sea lions. A little path (taking care not to step on the lava lizards that can’t be bothered to get out of the way) took us up to ‘Las Tijeretas’ viewpoint, where we enjoyed a breathtaking sunset.

The following day we hopped into a taxi and checked out the rest of the island. Major highlights include the volcano ‘El Junco’, ‘Puerto Chino’ beach, and ‘La Galapaguera’, a giant tortoises conservation centre. Everything is beautifully maintained and protected, lessening the pain of the 120 US$ fee foreigners need to plunk down when entering Galapagos.

So far so good, our stingy strategy was working like a charm! But we were soon faced with the two big drawbacks of doing Galapagos on a budget. The first one if that you can only visit the closest inhabited islands, as most of the inhabited ones are too far away to visit on a single day. The second drawback is that island hopping is done on these tiny overcrowded speedboats. On our first hop from San Cristobal to Santa Cruz, Jules and I had to resort to all of our Jedi powers not to join our fellow passengers in using the little black bags handed out by the crew (we wised up and bought motion sickness pills for the remaining trips).

Santa Cruz is the most populated of Galapagos’ islands, and the one with most tourists too. Get far enough out of town though, and you’ll have the island pretty much to yourself. ‘Tortuga Bay’, arguably the island’s gem, can only be reached by walking some 3km. This is one of the most incredible beaches we have ever seen (probably only second to ‘Praia Jalé’, in São Tomé), and we kept come coming back for extra swims and jogs across its pearly white sand.

The last island we visited was also our favorite: Isabela. Isabela is the archipelago’s largest island, but only the southern part is inhabited. Puerto Villamil, its main town, has streets made out of sand, no ATMs and only 2.200 inhabitants. We only got to a spend a couple of days there, but they ware fun packed: early morning runs through empty beaches, snorkeling with iguanas, kayaking with playful baby sea lions, and biking up to the ‘Muro de las Lágrimas’. The history behind the latter is rather sad. Isabela was a penal colony, from 1944 until 1959, when was closed due to severe abuses upon the prisoners. Hundreds died in the construction of this wall and other forced labour activities. The wall remains as a tribute to those days.

All in all, we had the privilege of spending 6 incredible days in Galapagos. This is definitely a place we’ll come back some day (we’ll set up a fundraise to do it in one of those 10.000 US$ margarita binge cruises)!