There’s so much to say about Galapagos that we decided to split it into two posts: in this post Jules talks about its wildlife, and here Verne talks about its people and places.

In 1831, disappointed with medicine but an avid naturalist, Charles Darwin got on board of the HMS Beagle for a five year voyage that would change drastically our perception of the world.
Having stopped and collected materials from numerous locations (Cape Verde, Fernando de Noronha in Brazil, Argentina, Chile, Australia, etc.) it was in the Galapagos that he had one of the breakthroughs of his theory of evolution, by noticing how the finches’ beaks (or ‘pajaritos de Darwin’ as they are affectionately called in the islands) adapted from island to island, depending on the native vegetation that the birds ate.

At the time Darwin’s theory was ridiculed, as it clashed with the prevalent creationist theory. A deeply religious man himself, Darwin died in angst and without ever knowing that he had developed one of the cornerstones of modern Science.

Galapagos’ finches were the basis for Darwin’s theory of evolution, as he noticed how its beak changed from island to island, depending on the native vegetation

Finches are quite friendly, especially if you’re eating cookies 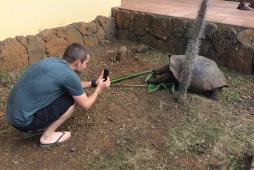 Giant tortoises were in the brink of extinction. Thanks to the conservation efforts, they are now being re introduced in all the islands 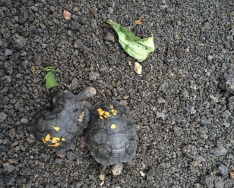 Baby turtles with deformed shells don’t usually survive, due to damaged internal organs, but this one was lucky and will grow up to be one of the islands quirkiest inhabitants 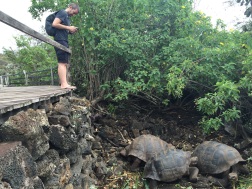 Galapagos turtles are big: here’s a couple of them next to Verne, for size

Different species of Galapagos turtles have evolved to suit specific environments: the one on the left has a taller shell to reach higher vegetation, while the one on the right is more compact to go through thick vegetation 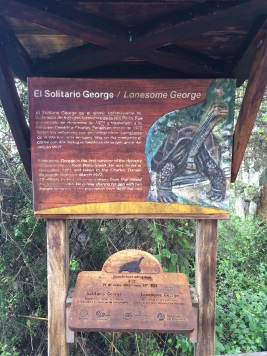 Lonesome George was unable to mate with other Galapagos turtles (despite valiant efforts) before it died in 2012, thus becoming the last member of its species 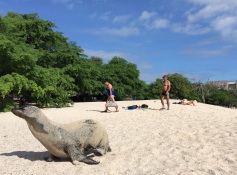 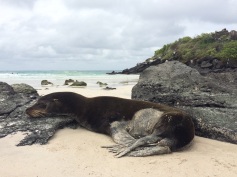 Sea lions are like cats: any position is good enough for sleeping!

This was the only time we encountered an aggressive sea lion: the male in the middle was very protective of its family, and it took as quite a bit to get to the other side of the boardwalk! 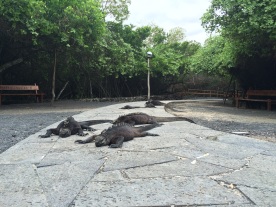 Would make a great B movie: ‘The invasion of the tourist-blood-seeking iguanas’

A marine iguana at ‘Tortuga Bay’ 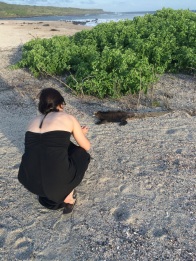 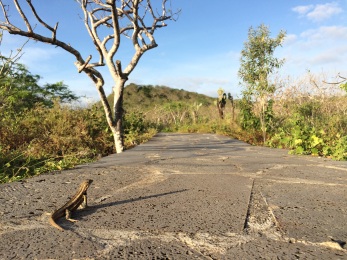 A close look at a ‘patas azules’ (blue footed booby)

A lot of care is put into avoiding that human interaction alters wildlife behavior, but these Pelicans have figured out the benefits of hanging around the fish market 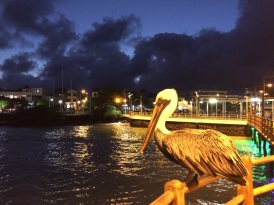 A pelican using the pier’s lights to catch fish

Where’s Wally? Try to spot the bird under cover in the rocks, in ‘Tortuga Bay’ 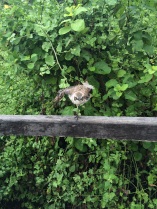 We have no idea what species of bird this is, but we had to snap a picture of this ‘Karate Kid’ move

A shy crab runs back to its hole at ‘Tortuga Bay’

Crabs in Galapagos are incredible climbers. See that red one? It’s a beautiful Sally Lightfoot crab, google it to see photos taken by more capable photographers

Galapagos takes its name from the huge tortoises that used to inhabit all the islands. Due to severe human hunting (the fact that they can hold up to six months without eating or drinking made them favorite delicacies for the seafarers) and introduced species like goats (which compete for the same food), they were at the brink of extinction. However, thanks to the extraordinary efforts of the protection centres, both in Santa Cruz and San Cristobal, successful reintegration programs are being held in all the islands. An exception is Pinta Island, that with the death of Lonesome George in 2012, lost the last of its endogenous species.

The differences in tortoise shells from island to island had already been noticed by Darwin, but at the time he could not collect enough samples to study them. We now know these to be another evidence of the evolution theory.

One thing that you’ll notice from the first moment you land in any of the islands, is the immense respect and pride that the locals have of their fauna and flora. This respect translates in a very peaceful coexistence, and the wildlife is so used to not being harmed that will feel very at ease near you. This is specially true for sea lions, that will shamelessly take your spot in the beach if they feel so: nothing to do but comply, as they are after all the rightful owners of the shores! Iguanas will blissfully ignore you, and you’ll find them lying everywhere, catching their precious sunlight. One can argue about their aesthetics, but once you see one of the adorable baby iguanas, you’ll also get hooked to this rebel looking reptile!

Perhaps one of our big surprises regarding this interaction with wildlife were birds. Usually so shy and unwillingly to interact with humans, here they’ll allow you to come so close that you will almost feel the wind in their feathers. Specially beautiful are the boobies with their intense blue feet, but pelicans and frigates also made beautiful photos. Talking about birds, to our surprise there are penguins in the Galapagos! Living only in the protected shores of Isabela, they are incredibly cute! Unfortunately none of our efforts to photograph them were successful, but they are vivid in our memory, swimming fast between our kayaks.

The Galapagos islands are a testament to both the succesfull efforts in preserving endogenous species, but also to the sadness of seeing an entire species die. Along with the amazing wildlife here, what touched us more in this visit was observing the way people here are building a future for themselves without jeopardizing the absolute respect for their wildlife heritage.