We were baffled by these apparent contradictions. More than in any other place so far, we felt an urging need to meet a patient local to whom we could ask all kind of impolite and dumb questions: How can you be this stern looking on the subway and then go home and watch cartoons of a giant blue cat? Why are there so few foreigners living in Japan? Why don’t you get along with China?

(Un)luckily, we didn’t get a chance to ask this sort of questions. But the next best thing happened: my cousin André, whom I hadn’t seen in more than ten years, was spending three weeks in Japan and knew way more about the country than we did. Together, we walked around Tokyo yapping away in Portuguese.

First impressions are not great but give it a second chance, because Tokyo is so much more than a tight mesh of concrete 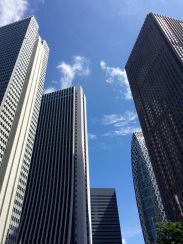 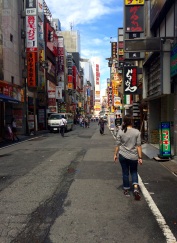 Kabukichō, the red light district, is pretty subdued during the day

Our nephew’s stuffed kiwi has a ‘Lost in Translation’ moment 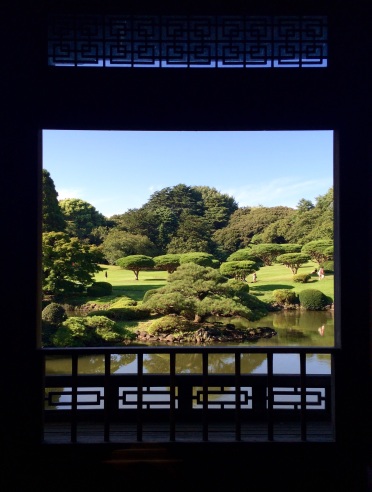 The Gyoen park includes several eastern and western styled gardens. This is a view of the Japanese garden… 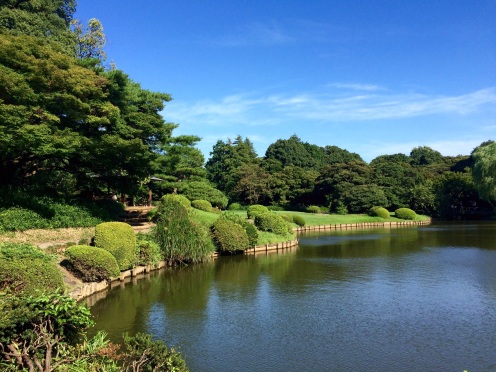 … Which includes a big pond full of Koi fish 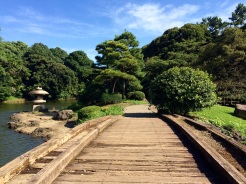 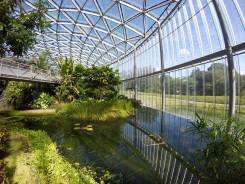 The Gyoen gardens also have a spectacular greenhouse

It’s definately not Venice, but there are some canals in Tokyo! 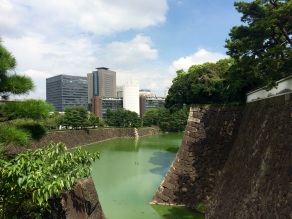 The Imperial Palace was bult on the former grounds of the Edo Castle, the seat of the shogun that ruled Japan till 1867

The Imperial Palace grounds are nested between skyscrapers

Fish meets dragon, near one of the Imperial Palace’s gates 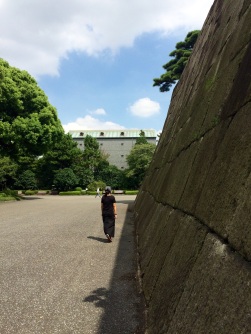 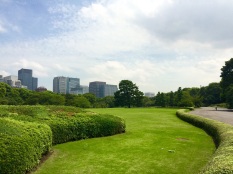 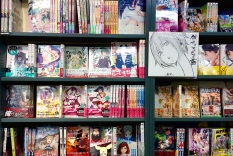 Inside a nine story shop dedicated to manga, anime…

… And some pretty weird fetishes 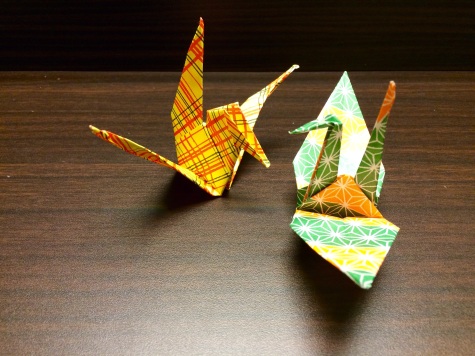 In Japanese hotels you get origamis instead of pillow chocolates 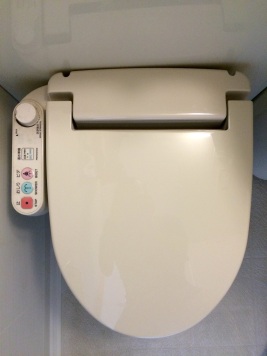 We didn’t plan on showing bathroom appliances on this blog, but Japanese toilets are awesome! 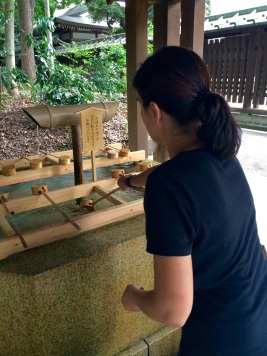 Jules purifying her hands at he Meiji-Jingū shrine 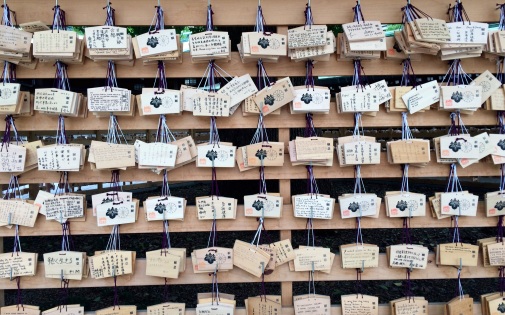 We took a bullet train from Tokyo to Kyoto

At a first glance, Tokyo is not what you would call a beautiful city: it’s certainly tidy and spotless, but lacks the old charm of European capitals. Give it a second chance though, because Tokyo is so much more than a tight mesh of concrete.

The first ward (Tokyo is made up of wards, or districts) we visited was Shinjuku, Tokyo’s commercial and administrative centre. Besides a multitude of skyscrapers, it hosts the busiest railway station in the world, something we experienced in the flesh by getting lost there multiple times (you would expect clearer directions from the people that created Kanban and all that lean manufacturing stuff). Right next to the skyscrapers there’s plenty of places for all those businessmen to relax: Golden Gai is a small quarter of narrow streets filled with pubs, Kabukichō is a red light district (where even the weirdest fetiches find a home) and Ni-Chōme is Tokyo’s best-known gay district. Walk another 200 meters and the scenery changes drastically again: the Shinjuku Gyoen is one of the most stunning collections of Eastern and Western-style gardens we have ever seen.

André was the first to venture an hypothesis to Tokyo’s apparent schizophrenia: during the day tradition and discipline keep a city of nearly 40 million from spiraling into chaos, but after that what you do privately is your own business. Indeed, at least from the perspective of a first-time visitor, Japanese seem to have achieved a delicate balance between collectivism and individual freedom. I would venture further on saying It’s a balance based on genuine mutual respect rather than strict rules.

Understanding how wide does that mutual respect run would require spending a lot more time in Japan, something that seems notoriously hard to do: only about 1.5% of people living there are foreign nationals. Indeed, Japan is hardly a “melting pot” and was once described by a prime-minister as a nation of “one race, one civilization, one language and one culture”. That may soon change – Japan is considering relaxing its strict immigration rules in order to inject new blood into an aging workforce – but for now there’s no shortage of foreigners that, much like Bill and Charlotte, feel Lost in Translation in Tokyo’s society.

Anyway, back to sightseeing. Shinjuku might be Tokyo’s de facto centre, but the official one is Chiyoda, home to the Imperial Palace. Unfortunately you can only visit the palace’s inner grounds two times a year: on January 2nd (New Year’s Greeting) and on December 23rd (the current Emperor’s birthday). Nevertheless, a visit to the areas around the palace is certainly worthwhile, particularly to the East Gardens and the Nijubashi, the two bridges that form an entrance to the palace’s inner grounds. By the way, Japan is the only constitutional monarchy in the world that still calls its monarch “Emperor”. This is something that probably doesn’t contribute to the tense relations with China. We’re also going to China on this trip, so we’ll wait for that before blabbering further about this topic.

Tokyo is of course much more than Shinjuku and Chiyoda, and we found worthwhile places to visit in all wards we ventured into. The Meiji-Jingū shrine in Shibuya, where we purified our hands in the ‘Temizuya’ and offered a prayer. The Sensō-Ji in Taito, Tokyo’s oldest temple (by the way, shrines are where Shinto is practiced, temples are for Buddhism). The Akihabara Electric Town in Chiyoda, the place to check out gadgets, anime and manga. And Roppongi, home to Maman (a giant bronze sculpture of a spider) and Gonpachi, the restaurant that inspired Kill Bill’s ‘House of Blue Leaves’.

There was more places to see and impolite questions to ask, but it was time to catch the bullet train to Kyoto. In the meantime, here’s some of the awesome pictures André took during his two weeks in Tokyo!

Tokyo is the world’s most densely populated city…

At the Senso-Ji in Taito, Tokyo’s oldest temple 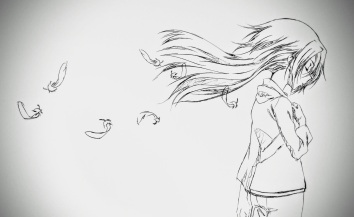 A manga drawing. By the way, although manga and anime are closely related, they mean different things: the latter refers to animations and the former to drawings 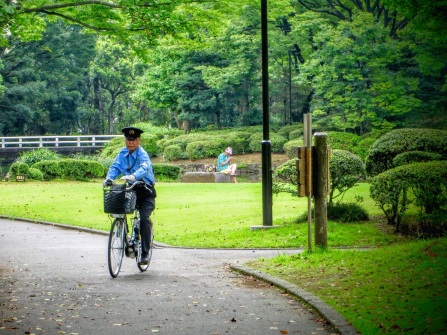 Bicycles are sadly no longer a common sight in Tokyo

The Maman (meaning ‘Mother’ in French) sculpture in Roppongi Hills, one of the swankiest neighborhoods of Tokyo