We arrived to Singapore by bus, after an easy five hours trip from Malacca. Malaysia left us with a very nice vibe, so we were looking forward to Singapore, a country that we had heard so much about but that none of us had ever visited. Some time ago I considered studying in Singapore but ended up staying in Europe, so I was really keen on seeing what I missed.

In Malay, Singapore means ‘Lion City’. Oddly enough, it seems that lions never lived in the island. Most likely, Sang Nila Utama, the prince that founded the Kingdom of Singapore in the 13th century and gave it its name, confused a lion with a tiger! 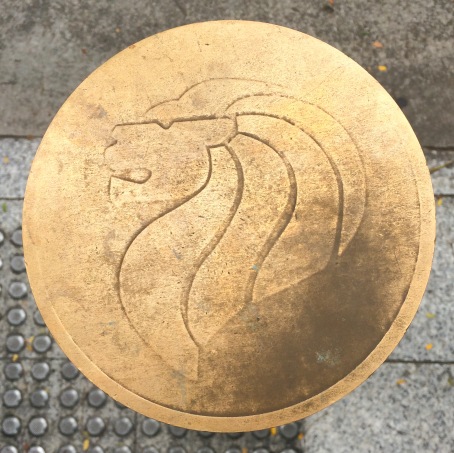 In Malay, Singapore means ‘Lion City’. Oddly enough, it seems that lions never lived in the island. Most likely, Sang Nila Utama, the prince that founded the Kingdom of Singapore in the 13th century and gave it its name, confused a lion with a tiger 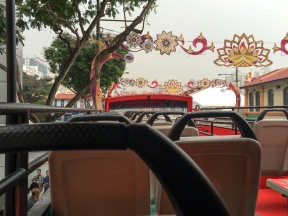 Like in many other cities, we started our Singapore visit with a hop-on hop-off…

… but the weather quickly turned to the worse 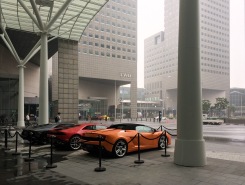 We though about taking one of these to continue touring Singapore during the downpour, but none matched our shoes

Fortunately some of our awesome friends that have visited Singapore recently came to the rescue and sent us their own pictures of the stuff we couldn’t visit. This is the Marina, probably Singapore’s most iconic quarter (photo credits: Rossana Santos)

This is the Marine Bay Sands, a three tower hotel with an infinity pool on that banana shaped terrace (photo credits: Susan Selgren)

Want to splurge for a night at the Marina Bay Sands? This is what you’re in for (photo credits: Ricardo Trindade)

The infinity pool at the top of the Marina Bay Sands (photo credits: Ricardo Trindade) 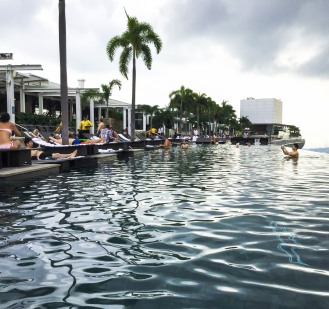 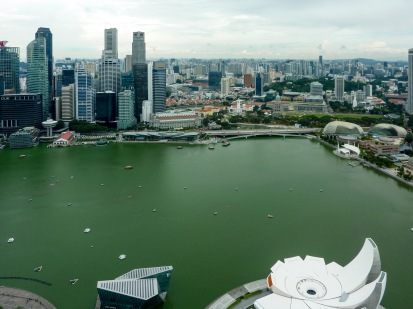 You can’t use the pool unless you’re a guest at the hotel, but you can still check out the view (photo credits: Rossana Santos)

The view of the Gardens by the Bay is breathtaking (photo credits: Rossana Santos)

One of the main attractions of the gardens are these “super trees”: measuring 25 to 50 meters, they seem like a supersized version of the steel trees of the Getty Center in Los Angeles (photo credits: Susan Selgren)

Here’s a picture of one of those “super trees” seen from below (photo credits: Ricardo Trindade) 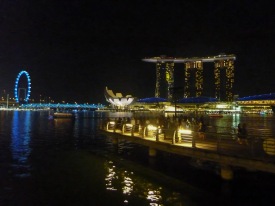 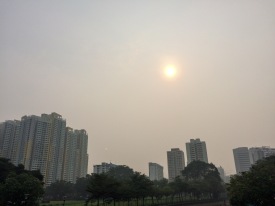 Like in Sydney, Singapore’s skyscrapers can create a bit of a claustrophobic feeling

That pointy thing is the Civilian War Memorial, in honor of the Singaporean civilians killed during World War II’s Japanese occupation. Each quadrant represents one of Singapore’s major ethnic groups: Chinese, Eurasian, Indian and Malay

A family relaxes at the shores of the Singapore River (photo credits: Ricardo Trindade)

Singapore was the first city in the world to implement electronic road tolls to curb congestion. That, together with stratospheric car ownership costs (the COE alone, a certificate required to own a car in Singapore, costs 40.000€+) pretty much ensures that there are no traffic jams

Move away a bit from downtown and you’ll bump into one of Singapore’s historic districts. This one is Tanjong Pagar (photo credits: Ricardo Trindade) 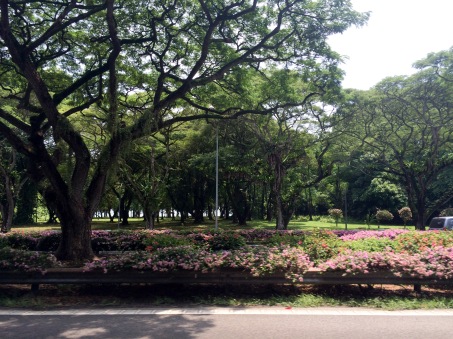 Albeit very small, Singapore is an impressive country. After centuries of being dominated by local empires, Sir Stamford Raffles, one of the icons of the country, founded Singapore as a British trading post. It became independent from Britain in 1963, as part of the Malaysian Federation. However, after only for two years, Singapore left the federation and established itself as a sovereign country.

By then, Singapore was a very poor country, without any major assets to rely on. Half a century has passes, and today it is one of the fastest growing economies in the world. The architect of this change was the recently deceased (March 23, 2015) Lee Kuan Yew. In 1965, he announced to his country that his dream of seeing Singapore united with the Malaysian federation was shattered, and that Singapore would have to proceed on its own. In a moment of political unrest in the world, with the delicate equilibrium of forces of the cold war, Lee understood that the best chances of success for Singapore relied in allying with its former colonisers and by attracting American, Japanese and European investment. The bet paid off and, in a single generation, Singapore went from a third world country to one of the leaders of the first world, with one of the highest indexes of trust in the government.

However, this success came at a cost, with Singapore being ruled as a “benevolent dictatorship”, combining an authoritarian state with a free market, limiting civil liberties (trade unions are residual, public protests are repressed and media are controlled) and lacking political opponents. Lee is seen by many as the creator of the “authoritarian capitalism” ideology that may have inspired Deng Xiaoping’s “market-Leninism” development model for China.

Most Singaporeans are originally from China, with the remaining population coming from Malaysia and India. However, it is a very multicultural hub, and it’s easy to find people from every corner of the world. You can find this diversity also in the architecture and landscapes of the city. The remains of some colonial buildings stand next to impressive skyscrapers and super modern buildings, like the spectacular Marina Bay Sands Hotel.

Downtown Singapore is a consumers’ paradise, with shopping malls on every corner. I had to keep reminding myself that everything that I bought would have to be carried on my back… it was persuasive enough, and I kept my wallet closed!

We had only planned for a day in Singapore, and we caught some nasty bug that made us cough constantly (or most probably a side effect of the haze), so we didn’t spend as much time discovering the country as it deserved. We were also unlucky with the weather, and most of our photos turned out pretty bad. Fortunately, some of our awesome friends that have visited Singapore recently came to the rescue and sent us their own pictures of the stuff we couldn’t visit. Kudos to them!

On our way to Bali now! I’ll spoil it a bit and say that we’ve seen the most beautiful corals of this trip there… that and turtles!