The world has probably never changed as quickly as it did in the 15th century. For thousands of years, civilisations had remained scattered around the world, isolated by water and by war. But in the early 1400s, driven by the crippling effect of the black plague, the Portuguese set sail to look for a sea route to the ‘Indies’ (South and Eastern Asia). The Spanish followed suite, crossing the Atlantic in hopes of finding an alternative route for the lucrative spice trade with the Indies. Little more than a century afterwards, both countries had succeeded. The Portuguese had found an eastern route, contouring Africa and discovering that the Indian Ocean wasn’t landlocked as previously thought. The Spanish had found an alternative western route, discovering the Americas in the process. While knowledge that the Earth was round dated back to the ancient Greeks, for the first time in history this had practical significance. The major continents had been mapped out and ships circumnavigated the world, connecting distant civilisations. And it all started with Madeira. 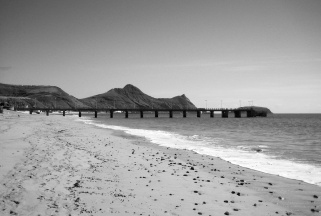 In 1418, during an exploratory mission of the coast of Africa, large waves and strong winds veered the ships of two Portuguese pilots – João Gonçalves Zarco and Tristão Vaz Teixeira – off course. They eventually found refuge on a long sandy beach, which they appropriately named Porto Santo (Holy Harbour). They had just found a needle in the immense haystack of the Atlantic.

A year after they found the neighbouring island of Madeira. Madeira was as luxuriant as Porto Santo was barren, and its rich soils and amenable weather allowed for a quick settlement. Farmers came from mainland Portugal to grow grain, sugar and sugar-beet, turning it into an important source of income for the Portuguese Crown. 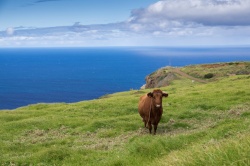 It is perhaps suiting that Madeira has turned into a popular tourist destination. At the turn of the year, people from all over the globe gather at the harbour, watching the fireworks light up the same horizon from where the first Portuguese ships appeared, almost 600 years ago. A full circle indeed. 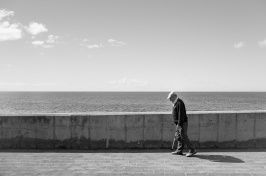 Walking around Funchal – Madeira’s capital – is also a time travelling experience. At a glance, the hilly city looks like a miniature version of Lisbon: cobblestone streets pave the way to fortresses; palaces and churches reveal intricate and beautiful gold carvings.

But whereas Lisbon is made up of limestone, Funchal’s settlers used local volcanic rock instead, creating a striking black version of the empire’s capital. Instead of sycamore trees, boardwalks are lined up with palm trees. Instead of grapes and olives, the undulating hills that surround Funchal grow bananas.

The beauty of the island extends well beyond the capital. There are water cascades rushing down steep inclines, right next to the winding mountain roads and trails. 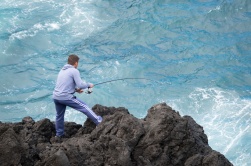 The sea below is fierce and varies in countless shades of blue. The pastures are of a saturated green and are home to countless cows and sheep. The orange and pink sunsets are breathtaking.

And everywhere and in everyone, you’ll find the good spirits and open smiles of the locals. Those that speak a little Portuguese will also notice the unique accent, different from anything one can hear in mainland Portugal.

66 thoughts on “Madeira, the beginning of the New World”